The five part series, written by Broome ornithologist Chris Hassell, is informed by many years of observations and on ground research for the Global Flyway Network (University of Groningen NIOZ Royal Netherlands Institute for Sea Research) at Roebuck Bay, Eighty Mile Beach and the Yellow Sea. Chris’ knowledge and passion for shorebirds is palpable in his writing of the series. 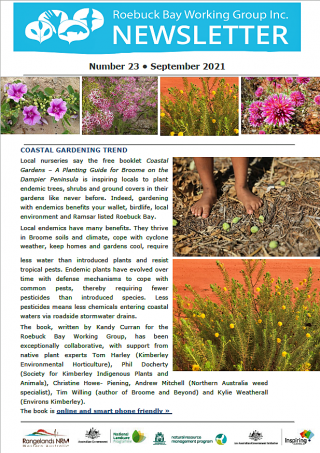 Roebuck Bay Working Group continues its outstanding work, with an innovative Science on the Broome Coast series, a popular Mud and Saltwater Short Film Fest, a cool as can be sign on the foreshore of Roebuck Bay and a Coastal Garden book that is creating a positive trend toward endemic gardens in the coastal town of Broome.

HOME AND AWAY: THE MARVELS OF MIGRATORY SHOREBIRDS POSTER COMPETITION

An invitation for primary school students (grades 3 to 6) to participate in the Australian Nuclear Science and Technology Organisation Shorebird Competition  (ANSTO) by designing a poster about protecting Roebuck Bay’s shorebirds. Individual or school entries accepted. As well as cash prizes for entrants in the ANSTO competition, you can enter the local competition with the best poster in each grade category receiving a Family pass to a Broome Bird Observatory Mangrove Tour AND winning posters will be framed and displayed at Broome Bird Observatory. Local competition entries close 14th August 2020, with  winners announced 1st September 2020. Winning entries will be judged by Broome Bird Observatory Staff.

Instructions for competition:
STEP 1 – Watch Birdlife Australia’s presentation – Home and Away: The Marvels of Migratory Shorebirds and learn about Roebuck Bay’s Shorebirds. Press this link »

STEP 2 – Click the link to find out more about the ANSTO Shorebird Competition and follow the instructions to enter. ENTRIES TO BE MAILED TO ANSTO AND RECEIVED BY 14th August 2020. ****SCAN A COPY OF YOUR POSTER BEFORE MAILING IT TO ANSTO****
Any queries please contact Grace Maglio at gracemagliorbwg@outlook.com

For  further instructions on how to enter – see the poster… There is a great story on a Question of Balance about the work being undertaken by Chris Hassell, a long term researcher with the Global Flyway Network in Broome to better understand the pressures that face migratory shorebirds on their annual breeding migration. Read the story »

Amelia Formby started today in a microlight! This awesome zoologist come artist has a dream to follow Broome’s Red Necked Stints from Australia to Siberia in a microlight. With Broome’s migratory shorebirds declining, Amelia wants to draw attention to their predicament and promote urgent action. What an amazing young woman.  You can hear Amelia speak about her ambitious project this year in the Science on the Broome Coast series – the date and poster coming soon.  Read about it here » 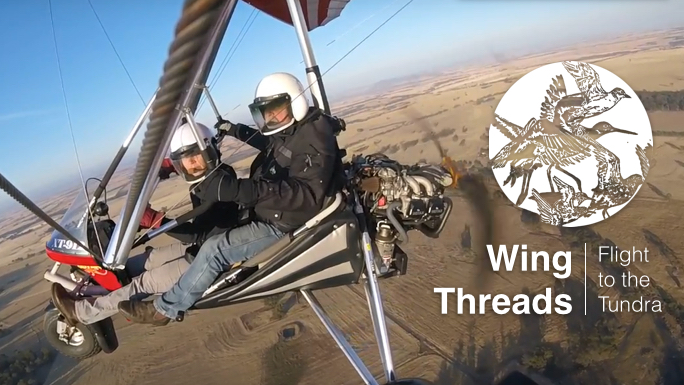 Remarkable animals in the mudflats Recognising the intertidal mudats of Roebuck Bay/Eighty Mile Beach as critical for up to 200,000 wintering migratory shorebirds, Professor Piersma and his team collaborated with DEC (then) to establish research projects to understand these biodiverse wetland wonders. From the research undertaken since 1997, what has been discovered about these invertebrates?

The Science on Broome Coast series is put on by Roebuck Bay Working Group and the Yawuru Land and Sea Unit. Broome’s migratory shorebirds are struggling to find food on their annual breeding migration due to industrial developments on their staging grounds on the Yellow Sea. © Jan van de Kam.

Roebuck Bay’s shorebirds are an inspiration for their ability to navigate and fly 10,000kms each year to breed in the Arctic Circle. However their migration is under threat as described in the Weekend Australian by Environment Editor Graham Lloyd.  Broome’s shorebird expert Chris Hassell is quoted in the story.  To read more about the migration and situation in the Yellow Sea, get hold of the book, Invisible Connections by Jan van der Kam from Broome Bird Observatory and Kimberley Bookshop »