Invertebrate Life in the Mudflats Roebuck Bay’ is the richest known intertidal mudflat in the world. © Kandy Curran

The mud and sandflats of Roebuck Bay are a haven for birds because they teem with a diversity of small invertebrate animals, like crabs, snails, shells and worms. Some crawling animals are not eaten by birds but add to the ecological functioning of the bay. Brittle stars are an example. Some invertebrates are active when the mudflats are lying dry and hide in burrows to escape predatory fish that come in with the tide. Others become active when water full of food particles is coming in, but dig deeper in the mud when the water retreats to avoid drying out or heating up, and to escape the hungry bills of shorebirds.

Research by scientists from the Netherlands have revealed that Roebuck Bay’s mudflats are some of the richest in the world in species biodiversity. International expeditions in 1997, 2000, 2002 and 2016 covered the intertidal flats with a fine grid sampling stations. Many volunteers helped to sample, sort and pick out the tiny living animals.

A Centre for Research 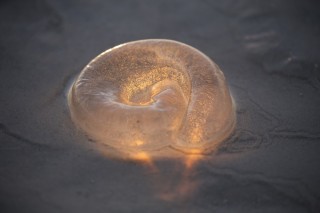 The egg mass of a conical moonsnail (Polinices conicus) illuminated by the moon. © Kandy Curran

Roebuck Bay is now one of the most extensively sampled tropical mudflats in the world. Yet every year new animals are found in the bay, proving that its total richness of animal life is not known. For example, the many samples taken during the research expeditions only covered the total surface of 40 sq km, a minuscule fraction of the intertidal area of the bay. Even in the samples taken, millions of tiny animals were flushed through the course (one millimeter) mesh of the sieves and escaped discovery.

The bewildering diversity of the Roebuck Bay mudflats is in stark contrast to that of equivalent habitats within temperate regions in the Wadden Sea in Western Europe for example, the diversity of bivalves is only a tenth of that of Roebuck Bay. There, the stress for animals due to the large changes in temperature, salinity and food over the course of a year must be even greater that Roebuck Bay. In this context Roebuck Bay, with a world record number of species for a mudflat, is the more stable environment, although you would not say so while slowly sinking into the mud while sampling! 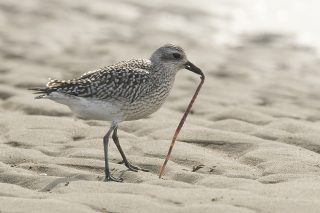