The ‘boundary’ of the East Asian-Australasian Flyway. Press to enlarge

ROEBUCK BAY has long been recognized as an internationally important place for migratory shorebirds. It was designated as a Ramsar site in 1990. Shorebirds are a very diverse family of birds. The majority that inhabit the bay are small to medium-sized (sandpipers, plovers and allies). They nest in the northern hemisphere from grasslands in northern China to the high Arctic tundra in Russia and migrate annually to non-breeding sites such as Roebuck Bay. Australia has ratified international conservation initiatives such as the Ramsar Convention and treaties with Japan, China and Republic of Korea.  This means that Australia has a legal obligation to protect migratory shorebirds and their habitats.

Roebuck Bay’s mudflats comprise fine muddy silts to sandy banks. The many micro-habitats within the bay’s mudflats provide a home for an amazingly wide range of invertebrates that are feeding on minute planktonic animals with the invertebrates in turn being food for about 110,000 shorebirds during the Austral summer months and about 15,000 during the Austral winter. The migratory shorebirds present in the winter are young birds not yet ready to breed.

Shorebird diversity is apparent in the various bill sizes, shapes and feeding techniques. Marine worms are soft and easy to swallow whilst other prey require specialist skills to eat. A good example of this is the Great Knot which eats bivalves, swallowing them whole and grinding up the shells in a very strong gizzard (the muscular stomach) to extract the soft flesh.

The daily cycle of a shorebird in the bay is totally governed by the tides. When the tide is high it covers the mudflats meaning the birds cannot feed. They are forced to find sandy bays and rocky outcrops to roost (rest) on until the tide recedes once again exposing the rich and plentiful food supply.

The roost sites on the northern shores of Roebuck Bay are very important. Unless huge tides have inundated the mangroves and salt marsh in the north east of the bay behind the mangrove fringe the beaches are the only daylight roosting option available to the shorebirds in the north of the bay. While the birds are roosting, they are very prone to disturbance. Birds of prey cause a lot of this disturbance but, it is also significantly affected by human influence, careless behaviour such as driving on the beach and uncontrolled dogs are very bad news for shorebirds that are trying to rest.

If high levels of disturbance are experienced by shorebirds at their roost sites it can have a bad effect on their welfare.

A shorebird’s life is one of high energy use. The birds are very often in moult that is, replacing old feathers that are either worn or not suitable for the season. This is the striking change between non-breeding plumage (generally browns and greys) and breeding plumage (generally reds, gold and black). The birds also need to accumulate fat that they use as fuel for their migration. Often the first leg of their northward migration will take them up to various sites in the Yellow Sea in China up to 6,400 km away. The birds increase their body weight by some 55 – 85 % prior to migration. Fat makes up the majority of this weight gain and is fuel for their flight to the next rich food supply, often the Yellow Sea. When they arrive their fat stores are depleted and so, they will refuel again for their flight to the breeding grounds. If the birds are constantly disturbed at high tide roosts, they use up precious fat reserves, which reduce the chances of successful migration. If they cannot make the journey, there will be no chicks and over time populations will decline. 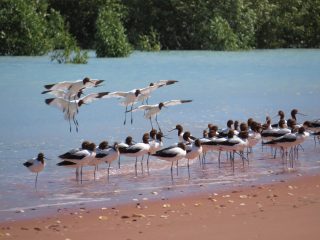 The Observatory is ideally situated on the shores of Roebuck Bay close to the famous  shorebird high tide roostsm providing a perfect base from which to explore Roebuck Bay and the rich birdlife of various habitats around Broome. The Broome Bird Observatory  Bird List boasts over 330 species within a 70 km radius! The Observatory has a new Discovery Centre that explains in beautifully presented and interactive panels, the story of Roebuck Bay and its birds. Visitors can witness some of the great sights in nature: vast flocks of roosting shorebirds at  high tide on the bay’s beautiful beaches, thousands of birds foraging on the mudflats as the tide falls, stunning breeding plumage of pre-migratory flocks in March, and breathtaking departures for Asia in March/April. The northern shores of Roebuck Bay are the only reliable site in Australia to witness shorebirds departing the continent!

Eastern Curlews migrate toward the setting sun © Ric Else

The five part series, written by Broome ornithologist Chris Hassell, is informed by many years of observations and on ground research for the Global Flyway Network (University of Groningen NIOZ Royal Netherlands Institute for Sea Research) in Roebuck Bay, Eighty Mile Beach and the Yellow Sea. Chris’ knowledge and passion for shorebirds is palpable in his writing of the series.

With such a diversity of birds massing on accessible roosts it is no wonder that Roebuck Bay is a magnet for shorebirds studies. The Australasian Wader Studies Group (AWSG) and the Global Flyway Network (GFN) have been catching and marking shorebirds in the bay for 40 years. And, GFN have been following the birds in to the Yellow Sea and documenting in detail hwo one site in particular, the Luannan Coast, Bohai Bay functions as a migratory stopover see GFN’s latest news and reports here Global Flyway Network site »

How can you help to support these birds? When you visit Roebuck Bay’s northern shores, please:

Peak scientific publication to use data from GFN study

There will also be a scientific paper published in the next volume of “Emu-Austral Ornithology” using the data from Chris Hassell’s 2009 visit and the data from Yan Hong Yan. This report highlights the pressures that the migratory birds are facing during their stopover periods in the Yellow Sea – open the report here »