ON THE MUDFLATS OF ROEBUCK BAY at low tide at the right time of year, you can experience one of the bay’s most important natural resources – seagrass. These grassy meadows are inhabited by many species of marine fauna and woven with trails that have been made by Dugongs when they feed on the seagrass rhizomes (roots).Come and learn about a fascinating part of our coast and contribute to its conservation.

Seagrass – vital for a healthy bay and world

SEAGRASS is a marine flowering plant found in oceans globally. It is vital to the health of marine ecosystems. About 75 percent of seagrass feeds bacteria, which are fundamental to the entire marine food chain. The other 25 percent of seagrass is eaten by animals such as Dugongs (eat up to 40kg a day), Green turtles, snails and crustaceans.

Seagrass habitats are critical for biodiversity, with about 40 times more animals living in seagrass meadows than on bare sand. You just have to peer into a patch of Roebuck Bay seagrass and you’ll notice worms, sponges, shrimp, starfish, crabs, sea urchins and other wonderful creatures. The seagrass meadows of Roebuck Bay support an impressive diversity and abundance of life. Each species relies on the presence and activities of all other species that make up this complex and fascinating habitat. These chains of of dependence are called “food webs”. View an interactive presentation »

Seagrass is vital to coastal management, with the meadows an indicator of the health of the coast, with early detection of change allowing managers to adjust practices and take rapid remedial action. Seagrass is important for a healthy climate, with studies finding that seagrass fixes as much carbon dioxide as tropical forests.

UNFORTUNATELY, seagrass around the world is vanishing at accelerating rates. Currently we lose a seagrass bed the size of a football field every half hour. Common causes of seagrass depletion include coastal development, dredgi ng and pollution. In Roebuck Bay seagrass beds are threatened by increasing industrial and residential development in Broome, with coastal/storm water run-off risking an increase in nutrients in the water, which can cause algae such as Lyngbya to bloom, smothering the seagrass and preventing it from accessing sunlight. The steady increase in the use of the Bay by residents, industry and tourists is also a threat to seagrass: human activities such as speed-boating over the seagrass meadows, driving on the beds to launch boats, and the accumulative impact of propeller and anchor scars all threaten seagrass, as do the risk of fuel and oil spills. 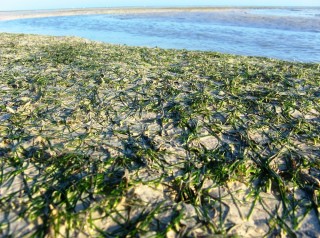 The Broome Community Seagrass Monitoring Project is one of more than 300 seagrass monitoring projects globally that help to protect seagrass. Three sites in Roebuck Bay are periodically monitored using methods specified by Seagrass-Watch, the world’s largest global scientific, non-destructive seagrass assessment and monitoring program.This local project engages the community as volunteer field workers, allowing everyday people to get involved in a robust scientific program that protects the coast. Volunteers gather data from quadrats, which are then entered into Seagrass-Watch’s national database, contributing to global information being collected about seagrass, while assisting coastal managers. The project is in the baseline collection phase; information collected at this indicates natural trends and changes in seagrass cover across seasons. References: Accelerating loss of seagrasses across the globe threatens coastal ecosystems G Kendrick et al, Proceedings of the National Academy of Sciences of the United States of America (PNAS 2009 : 0905620106v1-pnas.0905620106) | ABC Science News | Seagrass Watch.

The Broome Seagrass Monitoring Program is funded by Coastwest and Broome Port, and co-managed by Environs Kimberley, the Department of Parks and Wildlife and supported by Seagrass Watch.