The largest animals regularly sighted in Roebuck Bay are marine turtles and mammals including dugongs and three species of nearshore dolphins. Humpback and Killer Whales are also sighted occasionally in the deeper waters of Roebuck Bay. Roebuck Bay is recognised as a hotspot for the Australian snubfin dolphin. © Deb Thiele

THREE SPECIES of dolphins have been identified in Roebuck Bay and these include the Bottlenose Dolphin Tursiops sp., the Australian Humpback Dolphin Sousa chinensis and Australian Snubfin Dolphin Orcaella heinsohni.

The highly unique and enigmatic Australian Snubfin dolphin is a close relative of the Irrawaddy dolphin O. brevirostris and recently classified as critically endangered throughout its range in Asia. The Snubfin dolphin, which once inhabited the vast Kimberley mangrove systems, continues to exist in small remnants of these ecosystems. The Snubfin dolphin and many other marine wildlife species which rely on highly productive mangrove environments are under increasing threat from a rapid expansion in human activities and loss of mangrove habitat due to sea level rise from climate change.

THE ABUNDANCE and distribution of Snubfin dolphins are little known, particularly along the Kimberley Coast. Orcaella populations are in decline throughout much of their range in coastal Asia due to a suite of threats.

The level of human impacts has been much lower on the Kimberley Coast nearshore waters, than many other areas. However, almost no research has been undertaken here to ensure effective marine planning and the conservation of marine wildlife species and habitats. A recent expansion in human activities targeting the Kimberley’s rich mineral resources, remoteness and grandeur has resulted in intrusions into dolphin habitat with commercial fishing, coastal boat based ecotourism, recreational line and net fishing, illegal Indonesian fishing, oil and gas developments and extensive marine (pearl) farming.

To contribute valuable information about the snubfin dolphins in Roebuck Bay you can download the Dolphin Watch app for free from the App Store (iPhone) or Google Play (Android). https://www.riverguardians.com/ DUGONG FEEDING trails are often seen in Roebuck Bay. The calm shallow waters of Roebuck Bay which hold extensive seagrass meadows are the preferred habitat of Dugongs. Dugongs are migratory seagoing mammals that, when fully grown, may be three metres long and weigh 400 kilograms. In Australia, Dugongs swim in the shallow coastal waters of northern Australia from Queensland to the New South Wales border in the east to Shark Bay on the Western Australian coast. They are also found in other parts of the Indian and Pacific Oceans in warm shallow seas where seagrass is found.

Female dugongs give birth underwater to a single calf at three to seven year intervals. The calf stays with its mother, drinking milk from her teats and following close by until one or two years of age. Dugongs reach adult size between 9 and 17 years.

Dugongs are sometimes called ‘Sea Cows’ because they graze on seagrass roots. These marine plants look like grass growing on the shallow sandy floor of Roebuck Bay. Dugongs need to eat large amounts of seagrass, grazing an estimated 40 kgs per day.

Dugongs are slow moving and have little protection against predators which include people, large sharks and Estuarine crocodiles. Young Dugongs hide behind their mothers in danger. 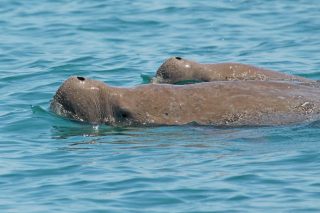 SEAGRASS MEADOWS off Roebuck Bay are the primary food source for mammals like the Dugong and Sea Turtle. Seagrass however is under threat from the impact of Lyngbya (blue green algae) and human activity.

Dugongs are protected under the Environment Protection and Biodiversity Conservation Act 1999, which lists Dugong as marine and migratory species. Dugongs are subject to a range of human threats in Australia, including entanglement in shark, mesh and gill nets, loss and degradation of important habitat such as seagrass meadows, and collisions with boats (also known as boat strikes).

The Australian Government is actively addressing these threats. For example, in 2003, marine debris was listed as a Key Threatening Process under the EPBC Act. As a result, a Threat Abatement Plan is being developed that will build on existing activities to reduce the impact of marine debris on threatened marine species, including marine turtle and Dugong.

Turtles are still relatively common in Australia, although in some parts of the world they have been hunted to near extinction. Green turtles Chelonia mydas are the most commonly sighted turtle in Roebuck Bay and in Western Australia, feeding predominately on animals and plants found in reefs and on seagrass. Turtles, like Dugongs, have cultural, spiritual and economic significance to the Traditional Owners of Broome, the Yawuru people. The numbers of Green turtles nesting WA is affected by the El Nino or Southern Oscillation of the Pacific Ocean, so numbers visiting a breeding beach can vary between a few dozen to hundreds in very poor seasons and many thousands at the best. A turtle nesting on the northern shores of Roebuck Bay. © Louise Williams

The main nesting areas in the Kimberley are the Lacepede Islands, with smaller regional nesting sites, Browse Island and Scott and Ashmore Reefs. Cable Beach and Roebuck Bay are also known nesting sites for Green Turtles, with the Department of Biodiversity, Conservation and Attractions (Broome) funning community based monitoring during the nesting season from October to February each year.

Larger turtles are harvested for food by Aboriginal people. If turtle eggs are readily accessible, they will also be collected. Indonesian fishers are also known exploiters of Green Turtles in Australian waters. A turtle hatchling beginning its journey to the ocean. © Kevin Smith

Migrating Green Turtles are known to cross international boundaries. For example, breeding Green Turtles tagged and released from nesting beaches in WA have been captured in Indonesia. Reciprocal exchanges have also been recorded.

Join in and make a contribution to their protection and management »

All turtles found in Australian waters are protected species at both State and Commonwealth levels under the Environment Protection and Biodiversity Act 1999.