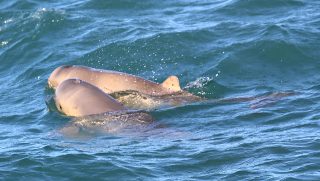 With its beakless rounded snout, this unusual cetacean was until 2005, thought to be the Irrawaddy river dolphin, a species once prevalent in South-East Asia. DNA and morphology reassessment revealed it be a separate species (Orcaella heinsohni) unique to northern Australia. This was an exciting discovery for modern day science, as it is extremely rare for a new species of mammal to be described.

Want to participate in Dolphin Watch training to learn how to document and identify dolphins in Roebuck Bay using a Dolphin Watch app?

Roebuck Bay’s snubfin population size is estimated to be 130, making it the largest known population in the Kimberley region. This population lives in the Yawuru Nagulagun / Roebuck Bay Marine Park and Broome Port waters and occasionally visits Cable Beach. Snubfin dolphins have a distinct dorsal fin on the top of its body, researchers use this to tell individual dolphins apart and give each one an identification code. The images of each dorsal fin and their unique identification code is available in the ‘FinBook Roebuck Bay’ which can be picked up from Parks and Wildlife Service (111 Herbert Street, Broome) and free online https://www.riverguardians.com/ 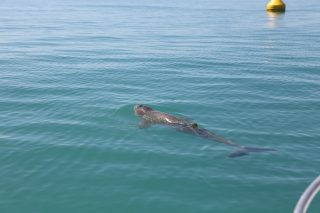 Keep boat speed under 5 knots if dolphins are seen, as they may be socialising and not be aware your approach © Kandy Curran

With the assistance of Dolphin Watch app users and Nyamba Buru Yawuru, the Department of Biodiversity, Conservation and Attractions(DBCA) undertook a dolphin census and sighted 3 dolphin species; snubfin, bottlenose and humpback dolphins. 91, 7 and 2 of each species respectively. Together with dolphin watch volunteers DBCA aim to continue monitoring the snubfin population and gather information on how they use Roebuck Bay.

To contribute valuable information about the snubfin dolphins of the bay you can download the Dolphin Watch app for free from the App Store (iPhone) or Google Play (Android).